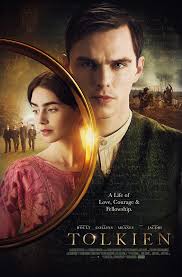 Review: A British biopic drama which explores the formative years of the author J.R.R. Tolkien in which he finds friendship, love and also artistic inspiration among a group of fellow outcasts. It also shows the tumultuous courtship with Edith Bratt and the outbreak of World War I.
Director: Dome Karukoski
Actors: Nicholas Hoult, Lily Collins, Colm Meaney, Craig Roberts, Harry Gilby, Laura Donnelly, Guillermo Bedward, Nia Gwynne, Pam Ferris, Adrian Schiller, Ty Tennant and Tony Nash
Year: 2019
Genre: Biography, Drama, History, Romance and War
Conclusion: 3/5
I did really enjoy watching this but I have wondered since whether it would have been better as a T.V. movie about Tolkien rather than a full feature length film. Also do we know for sure that this all played out like it did in real life for Tolkien? The one thing that did annoy me was that it focused so much on Tolkien that we never really got to see his brother and also where was he the whole time in J.R.R. Tolkien’s life? We obviously have The Lord of the Rings and The Hobbit films, do we really need a biopic about Tolkien’s life too? Nicholas Hoult and Lily Collins were both fantastic. The themes that this focuses on the most is love, friendship and the impact of war. Before the film’s release The Tolkien family and the Estate made an announcement which said “that they did not approve of, authorize or participate in the making of this film, and did not endorse it or its content in any way”.