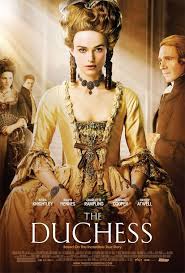 Review: A chronicle of the life of Georgiana Cavendish, the 18th Century Duchess of Devonshire, who had a passionate and doomed affair with Earl Grey who eventually became the leader of the Whig party, while trapped in a loveless marriage with her own husband the Duke of Devonshire.
Director: Saul Dibb
Actors: Keira Knightley, Ralph Fiennes, Dominic Cooper, Charlotte Rampling, Hayley Atwell, Simon McBurney, Aidan McArdle, John Shrapnel, Alistair Petrie, Patrick Godfrey, Michael Medwin, Richard McCabe, Calvin A. Dean, Bruce Mackinnon, Georgia King, Luke Norris, Kate Burdette, Laura Stevely, Benjamin Noble, Max Bennett and Katerina Tana
Year: 2008
Genre: Biography, Drama and History
Conclusion: 4/5
When this film was made and released it was heavily marketed with links to Princess Diana (who is a direct descendant of Georgiana’s family, The Spencers). There were so many similarities to Princess Diana, one of them is the tagline of “There were three people in her marriage”. It is based on a book by Amanda Foreman and she was invited on set throughout filming for accuracy purposes. Also it is a very dark movie, there is no joy in it whatsoever. It is a story which I knew nothing about but found absolutely fascinating. This does have similar characteristics to the film Marie Antoinette (2006) in the way that a lady is trapped in a house and a loveless marriage. The Duchess is a much more enjoyable and rewarding film. It is also directed with passion. Another film that Saul Dibb has directed is the amazing Bullet Boy (2004). I thought that Keira Knightley and Ralph Fiennes were both excellent. No matter what film Ralph Fiennes is in he always gives a fantastic performance. He also has a fantastic line in this film: “Will someone please put out the duchess’s hair”. I think that this is Keira Knightley’s best performance with such a difficult role to play. I felt she was playing her character unlike her normal self. The film was very well written and shot. I thought that the costumes were stunning. It took two hours every day to get Keira Knightley fully costumed. I loved the music in this composed by Rachel Portman who did the music for Emma (1996) and also Their Finest (2016) amongst other films. I love the one liner from the footman (Luke Norris, Poldark, 2015-2019) “The carriage awaits you maam”! I have just re-watched it for the second time and considering it was made in 2008 I did not find it dated or old fashioned in any way. It is still a film you can sit down and enjoy today. At the Academy Awards in 2009 this won one Oscar for Best Achievement in Costume Design. At the Bafta Awards in 2009 this also won for Best Costume Design.