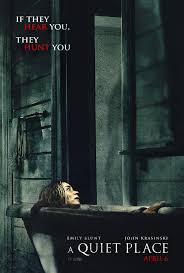 Review: A horror film in which a family of four must navigate their lives in silence while hiding from monsters that hunt by sound.
Director: John Krasinski
Actors: Emily Blunt, John Krasinski, Millicent Simmonds, Noah Jupe, Cade Woodward and Leon Russom
Year: 2018
Genre: Drama, Horror and Sci-Fi
Conclusion: 4/5
An amazing film!! I felt it kept my attention all the way through. This is what a horror film should be like. It is hard nowadays to actually find a good horror film that actually works on so many levels. Brilliant acting from all the cast especially Millicent Simmonds, who has actually been deaf since infancy due to a medication overdose. Emily Blunt and John Krasinski are actually husband and wife in real life. It was Emily Blunt who convinced John Krasinski to direct the film. The opening scene in this is actually the last sequence to be shot. The director wanted his movie creature to be extra special and so discussed its general design and animations with Industrial Light & Magic (ILM) veteran visual effects wizard Scott Farrar. This is a quote I found on imdb which to me sums everything up in one about this film; Actor-director John Krasinski has said that the single greatest compliment he received regarding the film, was in a tweet from the master of the horror story himself, Stephen King: “A QUIET PLACE is an extraordinary piece of work. Terrific acting, but the main thing is the SILENCE, and how it makes the camera’s eye open wide in a way few movies manage” (6 April 2018).