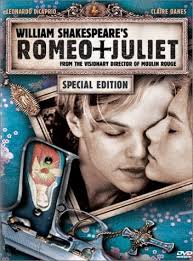 Review: The story of Shakespeare’s Romeo and Juliet. A young man and woman meet and instantly fall in love. The only problem is that the two family are bitter enemies. They love each other so much that they are prepared to risk everything.
Director: Baz Luhrmann
Actors: Leonardo DiCaprio, Claire Danes and Pete Postlethwaite
Year: 1996
Genre: Drama and Romance
Conclusion: 3/5
This Romeo and Juliet adaptation is best known to my generation. It is the one that everyone has watched. English teachers always use it to teach G.C.S.E. in their lessons. At the Bafta Awards in 1998 Nellee Hooper won the Award for the Anthony Asquith Award for Film Music. Also won Best Screenplay – Adapted and Best Production Design. Baz Luhrmann won the David Lean Award for Direction. The only criticism that I have is that I felt that Pete Postlethwaite wasn’t quite the right actor to play Father Laurence. Claire Danes wears a wig all the way through the film. Baz Luhrmann focused this film on the subject of violence. The setting in a seaside fairground is very original and unforgettable. This is on Barry Norman’s list of 100 Greatest Films of all time that he produced at the start of 2012 in the Radio Times.
http://www.imdb.com/video/screenplay/vi58720537?ref_=ttvi_vi_imdb_1