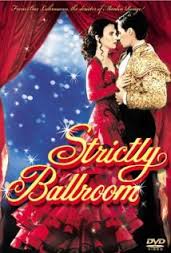 Review: A maverick dancer risks his career. He does this by performing an unusual dance routine. This infuriates the other ballroom dancers. Just before he goes for the ballroom championships he is forced to dance with a new partner.
Director: Baz Luhrmann
Actors: Paul Mercurio, Tara Morice and Bill Hunter
Year: 1992
Genre: Comedy, Drama and Romance
Conclusion: 3/5
Baz Luhrmann is a fantastic director. I really enjoyed this film although it is not his best work. This is the first film that Baz Luhrmann directed. This is also the first part of the Red Curtain Trilogy. The others are Romeo and Juliet and also Moulin Rouge!. In 1993 at the Baftas this won 3 awards. They were for Best Costume Design, Best Original Film Score and Best Production Design. In 1992 at the Cannes Film Festival this won the Best Foreign Film.
http://www.imdb.com/video/screenplay/vi1120968217/