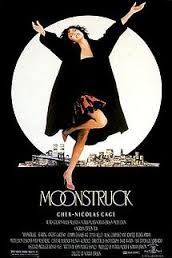 Review: Loretta Castorini finds herself in a difficult position.  She agrees to marry Johnny Cammareri but things start to change when she meets his brother Ronny.
Director: Norman Jewison
Actors: Nicolas Cage, Cher and Olympia Dukakis
Year: 1987
Genre: Comedy, Drama and Romance
Conclusion: 4/5
I don’t normally like Nicolas Cage but I thought that his performance was brilliant in this film. Excellent performances from Cher and Olympia Dukakis. Cher suggested Nicolas Cage to play the part of Johnny but the studio refused to have him. It is reported that Cher was going to pull out of the film if he wasn’t going to be cast. In 1988 at the Academy Awards this won 3 Oscars. They were for Best Actress in a Leading Role (Cher), Best Actress in a Supporting Role (Olympia Dukakis) and for Best Writing, Screenplay Written Directly for the Screen. Also that same year at the Golden Globe Awards it won Best Performance by an Actress in a Motion Picture – Comedy/Musical (Cher) and also Best Performance by an Actress in a Supporting Role in a Motion Picture (Olympia Dukakis). One film critic wrote “Cher is simply wonderful, and the teaming with Cage an inspiration. The rest of the cast couldn’t be better”.