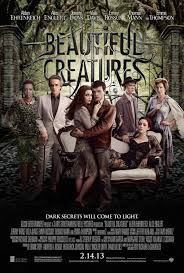 Review: A young man named Ethan longs to get out of his small Southern town. He meets a mysterious new girl named Lena. They work together to uncover secrets about their families, their history and also their town.
Director: Richard LaGravenese
Actors: Alden Ehrenreich, Alice Englert, Jeremy Irons, Viola Davis and Emma Thompson
Year: 2013
Genre: Drama, Fantasy and Romance
Conclusion: 2/5
Great cast but just a shame about the film. I found it to be too much like the Twilight films. The best thing about this film is Jeremy Irons. It is the only time that the film came to life was when he was on screen. This film didn’t do well at all at the cinema. Based on a novel by Kami Garcia and Margaret Stohi. Let’s just hope that there won’t be a sequel to this.