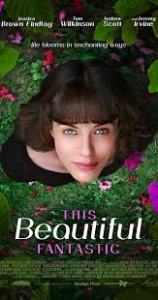 Review: A young woman who dreams of becoming a children’s book author makes an unlikely friendship with a rich curmudgeon who lives next door.
Director: Simon Aboud
Actors: Mia Farkasovska, Jessica Brown Findlay, Anna Chancellor, Jeremy Irvine, Eileen Davies, Tom Wilkinson and Andrew Scott
Year: 2016
Genre: Comedy, Drama and Romance
Conclusion: 2/5
An unusual quirky little film. This is almost a film that could have been filmed in lockdown. Great cast list including Anna Chancellor and Tom Wilkinson. When Andrew Scott was offered this role, he was keen to play a part in the film as he was tired of playing villains. The director originally planned to make this in 2010 with Carey Milligan. After falling through, it was resurrected two years later with Felicity Jones, Rhys Ifans and Rupert Friend but that too didn’t materialize.

4 thoughts on “This Beautiful Fantastic”