THE ADVENTURES OF ROBIN HOOD 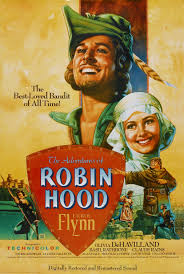 Review: When King Richard the Lionheart is captured, his brother Prince John and the Norman Lords begin oppressing the Saxon masses. Sir Robin of Locksley, the bandit of Sherwood Forest is outraged by this and rounds up his band of men which eventually wins the support of Maid Marian. He then accuses Prince John of treachery and when Richard returns to England he works alongside the king to stop Prince John from taking the crown.
Director: Michael Curtiz and William Keighley
Actors: Errol Flynn, Olivia de Havilland, Basil Rathbone, Claude Rains, Patric Knowles, Eugene Pallette, Alan Hale, Melville Cooper, Ian Hunter, Una O’Connor, Herbert Mundin and Montagu Love
Year: 1938
Genre: Action, Adventure and Romance
Conclusion: 5/5
I really enjoyed this film. I think this is a truly amazing film. There have been many adaptations of Robin Hood films over generations but I have to say that this is my all time favourite version. It is a very joyous film as well as serious. Watching this I could tell that all the actors and everyone involved enjoyed making this film. I also have to say that Errol Flynn makes the finest Robin Hood. This is the third of eight films to feature Errol Flynn and Olivia de Havilland in a film together. Actor Orson Welles was offered the roles of Friar Tuck and King Richard, but he turned them both down. Also, actor Robert Donat was offered the role of Robin Hood, but turned it down due to illness. There were discussions that there was going to be a sequel to this film called “Sir Robin of Locksley”, but it was never developed. This is on the late Barry Norman’s list of 101 Greatest Films of all time that he produced at the start of 2012 which featured in The Radio Times. At the Academy Awards in 1939 this won 3 Oscars. They were for Best Art Direction, Best Film Editing and Best Music, Original Score.