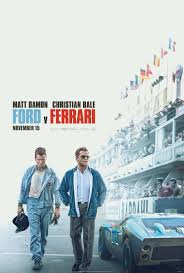 Review: Based on a true story, which concerns an American car designer Carroll Shelby and British driver Ken Miles who battle corporate interference, the laws of physics to build a revolutionary vehicle for the Ford Motor Co. Together, they plan to defeat the race cars of Enzo Ferrari at the 24 Hours of Le Mans in France in 1966.
Director: James Mangold
Actors: Matt Damon, Christian Bale, Jon Bernthal, Caitriona Balfe, Josh Lucas, Noah Jupe, Tracy Letts, Remo Girone, Ray McKinnon, JJ Feild, Jack McMullen, Corrado Invernizzi, Joe Williamson, Ian Harding and Christopher Darga
Year: 2019
Genre: Action, Biography, Drama and History
Conclusion: 4/5
Original title for this film is Ford v Ferrari. The last film that James Mangold directed was Logan (2017) which I enjoyed. I thought that Matt Damon was fantastic in this and gave one of his best performances. Apparently Matt Damon said that the number one reason he wanted to do the movie was to work with Christian Bale. I enjoyed Caitriona Balfe and Christian Bale’s performances. In order for Christian Bale to prepare for his role he took race driving lessons at the Bondurant High Performance Driving School. As it turned out, the founder of the school had been a friend of Ken Miles. One thing I was shocked and surprised about was Christian Bale’s weight at just how thin he was but according to Matt Damon, Christian Bale had to lose seventy pounds before filming began. I really liked the race sequences and thought they were very well done. I found them all to be really tense. I am not one for sitting and watching things like Formula 1 etc but this made me realize just how much racing drivers like Lewis Hamilton have to go through. This did remind me for obvious reasons of Senna (2010) and also Rush (2013) both of which I really enjoyed. This film is 2 and a half hours so very long but watching it you didn’t feel that it was that long. Even though this is a true story I had no idea what was going to happen. It all came as a complete surprise to me. At the Academy Awards in 2020 this won 2 Oscars. They were for Best Achievement in Film Editing and also Best Achievement in Sound Editing. At the Bafta Awards in 2020 this won for Best Editing.