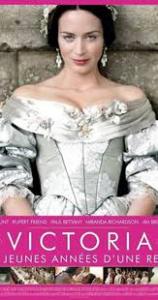 Review: A dramatisation of the turbulent first years of Queen Victoria’s rule, and her romance with Prince Albert.
Director: Jean-Marc Vallee
Actors: Emily Blunt, Rupert Friend, Paul Bettany, Miranda Richardson, Jim Broadbent, Thomas Kretschmann, Mark Strong, Jesper Christensen, Harriet Walter, Jeanette Hain, Julian Glover, Michael Maloney, Michiel Huisman, Genevieve O’Reilly and Rachael Stirling
Year: 2009
Genre: Biography, Drama, History and Romance
Conclusion: 3/5
Co-produced by Martin Scorsese and Sarah Ferguson. Brilliant cast list with the likes of Emily Blunt, Paul Bettany, Mark Strong and Miranda Richardson. I think that Paul Bettany was fantastic cast as Lord Melbourne. However, it came across to me in the film that the age gap was very close; in real life he was forty years older than Victoria and you could argue that he was in reality a father figure to her. The screenplay was written by Julian Fellows who most famously wrote Gosford Park (2001). I won’t say what happens because I don’t like letting out plot spoilers but something happens to Prince Albert which they have totally made up and added in. Whether or not it is to make the story more entertaining for the audience I don’t know. Viewers will have to find out for themselves what the scene is and what happens. I enjoyed Emily Blunt’s performance and also great to see a period costume drama, especially one with such outstanding costumes. All of the costumes that Emily Blunt wears were insured for £10,000 each. I loved Jim Broadbent’s cameo! Even though there are some historical inaccuracies overall it is good harmless entertainment. At the Academy Awards in 2010 it won one Oscar for Best Achievement in Costume Design. At the Bafta Awards in 2010 it won two awards for Best Costume Design and also Best Make Up & Hair.