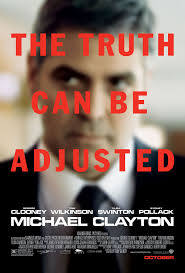 Review: A law firm brings in a fixer to sort out a situation after a lawyer has a breakdown while at the same time representing a chemical company that he knows is guilty in a multi-billion-dollar settlement. The fixer must decide between his loyalty and his conscience.
Director: Tony Gilroy
Actors: George Clooney, Tilda Swinton, Tom Wilkinson, Micheal O’Keefe, Sydney Pollack, Danielle Skraastad, Alberto Vazquez, Brian Koppelman, Tom McCarthy, Denis O’Hare, Julie White, Austin Williams, Jennifer Van Dyck and Frank Wood
Year: 2007
Genre: Crime, Drama and Thriller
Conclusion: 4/5
Acting debut for Tony Gilroy, who is most famous for writing the Bourne trilogy (2002-2012). Amazing performances from George Clooney and Tilda Swinton. Usually in all the films that George Clooney plays he normally has a twinkle in his eyes but in this he is a really tough businessman. Denzel Washington was originally chosen for the title role but turned it down, saying he was skeptical of working with a first-time director. George Clooney was also worried about first time director and turned the role down. It wasn’t until he later met Tony Gilroy that he realized that they were both on the same page two hours into the meeting, and agreed to star. After seeing this film Washington said that he regretted his decision. At the Academy Awards in 2008 this won one Oscar for Best Performance by an Actress in a Supporting Role (Tilda Swinton). At the Bafta Awards in 2008 this won one award for Best Supporting Actress (Tilda Swinton).