THE MAN WHO KNEW TOO MUCH 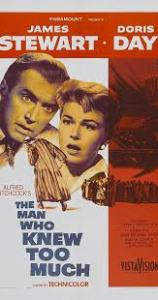 Review: An American physician and his wife are witness to the street killing of a Frenchman they’ve recently befriended. They discover that their son has been kidnapped and taken to England. There is a climactic moment in London’s famous Royal Albert Hall where the American physician knows that there is going to be a political assassination during the concert.
Director: Alfred Hitchcock
Actors: James Stewart, Doris Day, Brenda de Banzie, Bernard Miles, Daniel Gelin, Alan Mowbray, Hillary Brooke, Christopher Olsen, Reggie Nalder, Richard Wattis, Noel Willman and Alix Talton
Year: 1956
Genre: Classics, Drama and Thriller
Conclusion: 5/5
Apparently there is still a debate as to whether this 1956 version is superior to his own original 1934 version. This film is 45 minutes longer that the original film. James Stewart and Doris Day both work together nicely in this. It is his performance though that stands out above everybody else’s and is superb. The famous scene shot at the Royal Albert Hall lasts for 12 minutes without a single word of dialogue, and consists of one hundred twenty-four shots. There is a scene in this where we see the physician walking down the street to search for his young son. At the Academy Awards in 1957 this won one Oscar for Best Music, Original Song.