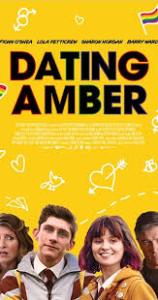 Review: Set in Ireland during the middle of the 90’s, two school friends, Eddie and Amber decide to start a pretend relationship in order to stop everyone speculating about their sexuality. This is also about kids who grow up in a small town who need to escape so they can be themselves.
Director: David Freyne
Actors: Fionn O’Shea, Lola Petticrew, Sharon Horgan, Barry Ward, Simone Kirby, Ian O’Reilly, Emma Willis, Lauryn Canny, Peter Campion, Ally Ni Chiarain and Tara Flynn
Year: 2020
Genre: Comedy, Drama and Romance
Conclusion: 3/5
A lovely sweet easy going comedy. This film stars Fionn O’Shea which we have just seen on BBC’s Normal People (2020). Also Barry Ward was in the film Jimmy’s Hall (2014). I found this to be really interesting but I also felt that they touched on the subject matter very sensitively and very well handled. I loved the characters in this and I almost felt sorry for them and sympathised with them. I did find myself laughing quite a few times.