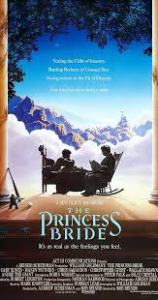 Review: A fairy-tale adventure about a beautiful princess and the gallant hero who rescues her from an evil villain.
Director: Rob Reiner
Actors: Cary Elwes, Mandy Patinkin, Robin Wright, Chris Sarandon, Christopher Guest, Wallace Shawn, Andre the Giant, Fred Savage, Peter Falk, Peter Cook, Mel Smith, Carol Kane, Billy Crystal and Anne Dyson
Year: 1987
Genre: Action, Adventure, Comedy, Family, Fantasy, Romance and Sci-Fi
Conclusion: 5/5
A Classical film! What is there not to enjoy when watching this film? This film was adapted from a novel by William Goldman. This is the ultimate film to watch if you are at home feeling unwell. I also love this film as it is properly funny and very charming. Watching it for the second time I forgot just how well written the script is. Plus I love how the princess is called Buttercup and couldn’t think of a better name for a princess. What I also love about this film is the length of time which is perfect and doesn’t drag on for longer than is necessary. It has got a brilliant supporting cast. Robin Wright and Cary Elwes were both smitten with each other during filming, this then helped their chemistry in the movie. Actress Uma Thurman auditioned for the role of Buttercup, but she was deemed too exotic looking for the part. Also Courteney Cox and Meg Ryan both auditioned for Princess Buttercup. Mandy Patinkin once quoted that the role of Inigo Montoya is his personal favourite over the course of his entire career. I love Mandy Patinkin’s one liner “My name is Inigo Montoya. You killed my father. Prepare to die”.