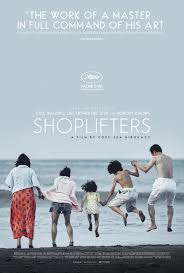 Review: A family of small-time crooks takes in a young girl they fear is being abused.
Director: Hirokazu Koreeda
Actors: Lily Franky, Sakura Ando, Kirin Kiki, Mayu Matsuoka, Jyo Kairi and Miyu Sasaki
Year: 2018
Genre: Art House, Crime, Drama and International
Conclusion: 4/5
What gave Koreeda the idea for this project was that he had heard of families illegally receiving retirement pensions from their long-dead parents. A truly fascinating film on so many levels. From the same director that directed After the Storm (2016). I actually enjoyed this film much more than After the Storm (2016). The film Shoplifters is a real thought-provoking piece of film-making. The original title for this film is Manbiki Kazoku. This translates as Shoplifting Family.