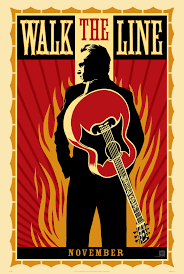 Review: A story of Johnny Cash who was a country music legend. It follows this early days on Arkanses cotton farm to his rise to fame with Sun Records in Memphis. This is were he recorded with the likes of Elvis Presley and Jerry Lee Lewis.
Director: James Mangold
Actors: Joaquin Phoenix, Reese Witherspoon, Ginnifer Goodwin, Robert Patrick, Dallas Roberts, Dan John Miller, Larry Bagby, Shelby Lynne, Tyler Hilton, Waylon Payne, Shooter Jennings, Sandra Ellis Lafferty, Clay Steakley and Johnny Holiday
Year: 2005
Genre: Biography, Drama and Music
Genre: 4/5
This is a fantastic film!!! A very well done to the two lead artists Joaquin Phoenix and Reese Witherspoon, who are both exceptional. One of the reasons why this film worked so well I think was because during filming they both developed a very codependent relationship and also relied on each other so much that they made a secret pact. The secret pact was that if one of them left or dropped out, the other would leave as well. They also performed all of the songs themselves, without being dubbed and learnt to play their instruments. So many memorable songs in this that you will still be singing them days after you have watched the film. Another film that is very similar to this in so many ways in the film Ray (2004). The only scene that I didn’t think worked well but at the same time needed to be in was when Johnny Cash and June Carter were both on stage. It was like they added it into the film for entertainment value; the truth is is that it did actually happen in real life. At the Academy Awards in 2006 this won one Oscar for Best Performance by an Actress in a Leading Role (Reese Witherspoon). At the Golden Globe Awards in 2006 this won three awards. They were for Best Performance by an Actor in a Motion Picture – Comedy or Musical and (Joaquin Phoenix) and also Best Performance by an Actress in a Motion Picture – Comedy or Musical (Reese Witherspoon) and also Best Motion Picture – Comedy or Musical. At the Bafta’s in 2006 this won two awards. They were for Best Performance by an Actress in a Leading Role (Reese Witherspoon) and also for Best Sound.