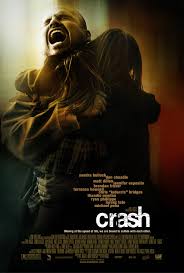 Review: This is a story played out on interweaving stories to do with the issues of race, loss and redemption by a group of residents in Los Angeles who lead vastly separate lives collide.
Director: Paul Haggis
Actors: Don Cheadle, Sandra Bullock, Thandie Newton, Karina Arroyave, Art Chudabala, Sean Cory Cooper, Tony Danza, Keith David, Loretta Devine, Matt Dillon, Jennifer Esposito, Ime Etuk, Eddie J. Fernandez, William Fichtner and Howard Fong
Year: 2004
Genre: Crime, Drama and Thriller
Conclusion: 4/5
I don’t know how it came about but apparently Don Cheadle helped get this film off the ground. As well as this being about race, loss and redemption it is also about spirituality and religion. I do think that this is a film that will always stand the test of time. All the characters seem real and feel like we can relate to them. Solid acting by all the cast but the one that stands out for me is Matt Dillon. Even though Sandra Bullock is well renowned for her role, she actually only has only 5 minutes of screentime throughout the entirety of the film. Also Paul Haggis has done a fantastic job bringing the whole film to life. As well as writing the screenplay for this he also wrote the screenplay for Million Dollar Baby (2004). At the Academy Awards in 2006 this won 3 Oscars. They were for Best Motion Picture of the Year, Best Writing, Original Screenplay and Best Achievement in Film Editing. At the Bafta Awards in 2006 this won Best Screenplay – Original and Best Performance by an Actress in a Supporting Role (Thandie Newton).