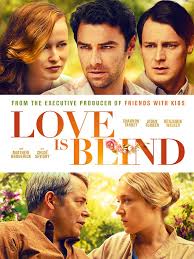 Review: A young woman undergoes therapy to deal with her inability to see certain people, like her mother and also a suicidal man who has fallen in love with her.
Directors: Monty Whitebloom and Andy Delaney
Actors: Shannon Tarbet, Aidan Turner, Benjamin Walker, Matthew Broderick, Chloe Sevigny, Mark Blum, Jason Fuchs, Kabby Borders, Katrina Lenk and Grant MacDermott
Year: 2019
Genre: Comedy and Drama
Conclusion: 2/5
Although this was all filmed in 2015 it has only just been released. This film is also known as Beautiful Darkness. I could watch Aidan Turner in anything that he is in no matter how poor the film is. He always brings 100% into his performances. As this is Monty Whitebloom and Andy Delaney’s directorial debut I think they have done a real good job on such a story-line that can’t be easy to put onto the screen. I enjoyed this film on a Friday night on Amazon Prime but would have been disappointed if it ever was shown at the cinema.