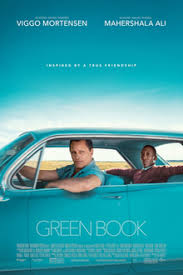 Review: An Italian-American bouncer takes a job as a driver of an African-American classical pianist on a tour through the 1960s Deep American South.
Director: Peter Farrelly
Actors: Viggo Mortensen, Mahershala Ali, Linda Cardellini, Sebastian Maniscalco, Dimiter D. Marinov, Mike Hatton, P.J. Byrne, Joe Cortese, Maggie Nixon, Von Lewis, Don Stark, Anthony Mangano, Paul Sloan and Quinn Duffy
Year: 2018
Genre: Biography, Comedy and Drama
Conclusion: 3/5
The title and subject matter are a reference to “The Negro Motorist Green Book,”. Based on a true story. There has been a lot of controversy about this film. For instance it has been said that Dr. Donald Shirley’s family had not been contacted or informed about this film or even been given the go ahead to make it. We have no idea whether Dr. Donald Shirley or Tony Lip were good friends or whether they were just colleagues. Mentioning this director Peter Farrelly said he was under the impression there “weren’t a lot of family members”. Also Mahershala Ali responded with an apology to Shirley’s nephew, Edwin Shirley III, saying that “I did the best I could with the material I had” and also that he was not aware that there were “close relatives with whom I could have consulted”. This isn’t a note perfect film but what makes the film so amazing are the performances from both Viggo Mortensen and Mahershala Ali. Before filming, Viggo Mortensen was invited to meet Nick Vallelonga’s family over a six-hour dinner. It is a really funny and charming film. At the Academy Awards in 2019 this won 3 Oscars. They were for Best Motion Picture of the Year, Best Performance by an Actor in a Supporting Role and also Best Original Screenplay. At the Golden Globe Awards in 2019 this won 3 Awards. They were for Best Screenplay – Motion Picture, Best Motion Picture – Musical or Comedy and Best Performance by an Actor in a Supporting Role in a Motion Picture (Mahershala Ali). At the Bafta Awards in 2019 this won for Best Supporting Actor (Mahershala Ali).