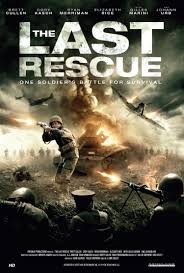 Review: This is a U.S. World War II war film, taking place shortly after D-Day, in which small group of US soldiers and two nurses find themselves trapped behind enemy lines. The US take a high-ranking German officer as their prisoner and try to orchestrate an escape.
Director: Eric Colley
Actors: Brett Cullen, Cody Kasch, Gilles Marini, Ryan Marriman, Johann Urb, Elizabeth Rice, Darren Keefe Reiher, Hallie Shepherd, Tony Doupe, Tino Struckmann, Fred Griffith, Dawson Doupe and Daniel Magill
Year: 2015
Genre: Action, Adventure, Drama and War
Conclusion: 2/5
The whole film only took 12 days to film. Didn’t have to work much on the set so therefore small budget on a small scale. This would have been better as a t.v. mini-series rather than an 1hr and 47min film. I also felt that the screenwriters could have done more on working on the script.