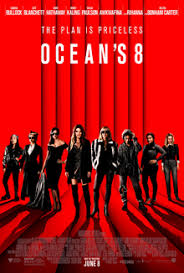 Review: Debbie Ocean has just been released from prison, puts together an all female team to attempt an impossible heist at he New York City’s Met Gala, and a necklace which is worth an excess of 150 million dollars.
Director: Gary Ross
Actors: Sandra Bullock, Cate Blanchett, Anne Hathaway, Griffin Dunne, Deidre Goodwin, Daniella Rabbani, Brian J.Carter, Gemma Forbes, Katherine Hozier-Adams, Francesca Calo, Midori Francis, Elliott Gould, Richard Armitage, Charlotte Kirk, Helena Bonham Carter, Rihanna, Dakota Fanning and James Corden
Year: 2018
Genre: Action, Adventure, Comedy, Crime and Thriller
Conclusion: 3/5
This film opens the same way as the Ocean’s Eleven (2001) did but with Sandra Bullock coming out of prison (was George Clooney, 2001). Directed by Gary Ross who has worked on films such as Free State of Jones, 2016 and also The Hunger Games, 2012. I don’t think that this had the spark like all the other Ocean films had. I felt it was lacking in something but I can’t just put my finger on it. It is o.k. to watch if you don’t have to think too hard. It didn’t have enough story-line or substance to work with but it passes the time fine. Great ensemble cast who all look like they are enjoying themselves. Sandra Bullock held the whole film together. Without her it would not have been possible. Anne Hathaway replaced Jennifer Lawrence in this film. In Silver Linings Playbook (2012) Lawrence replaced Hathaway. Jennifer Lawrence left due to scheduling conflicts. This is not James Corden’s fault but I thought he was just typical of himself. Whether he was just not directed right I don’t know. Elizabeth Banks was approached to play a role but had to drop out. Richard Armitage took over from Damien Lewis at very short notice. It is what I would call a great popcorn film.