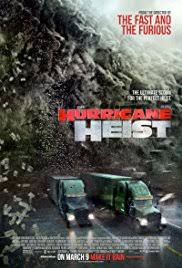 Review: A criminal gang attempts to carry out a robbery against the U.S. Treasury as a Category 5 hurricane approaches one of its Mint facilities.
Director: Rob Cohen
Actors: Toby Kebbell, Maggie Grace, Ryan Kwanten, Ralph Ineson, Melissa Bolona, Ben Cross, Jamie Andrew Cutler, Christian Contreras, Moyo Akande, James Barriscale, Erik Rondell, Mark Basnight and Keith D. Evans
Year: 2018
Genre: Action, Adventure, Crime, Drama and Thriller
Conclusion: 2/5
Just about watchable trashy rubbish. There is a lot of violence, threat and strong language in this film. I was not inspired from start to finish. I was hoping it would start to pick up a bit but no chance. Again like most films (especially for this) it was far too long for what it needed to be. Apparently this received negative reviews and was a box office bomb, making just $12 million against its estimated $35 million budget.