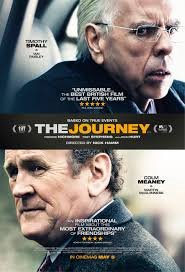 Review: It is during the 2006 Northern Ireland peace talks. Both the Sinn Fein leader Martin McGuiness and the Democratic Party leader Ian Paisley are forced to share a short but momentous car ride together.
Director: Nick Hamm
Actors: Timothy Spall, Colm Meaney, John Hurt, Freddie Highmore, Toby Stephens, Catherine McCormack and Ian McElhinney
Year: 2016
Genre: Art House, International and Drama
Conclusion: 3/5
This isn’t the sort of film that I would normally watch or think of watching. However I found myself rather enjoying it. It is an odd and interesting little film. It imagines the whole scenario of what might have happened on the journey taken by Martin McGuiness and Ian Paisley. What I enjoyed the most was the information before the film and after. It is well directed by Nick Hamm and the performances were good, but for me Timothy Spall gave the best performance. I do think the actor playing Tony Blair could have been better cast. Although having said that, this might well be because I did think of Michael Sheen who played Tony Blair in The Queen, 2006 and can’t imagine anyone else playing that part apart from him.