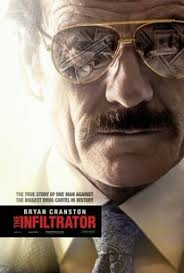 Review: U.S. Customs official Robert Mazur goes deep undercover to infiltrate a money laundering scheme involving Columbian drug lord Pablo Escobar.
Director: Brad Furman
Actors: Bryan Cranston, John Leguizamo, Diane Kruger, Daniel Mays and Jason Isaacs
Year: 2016
Genre: Biography, Crime and Drama
Conclusion: 3/5
Based on a true story and one in which I knew nothing about. Because I knew nothing about this I felt engaged with it unlike most true stories. I did not know what the outcome obviously would be. Fantastic cast. Bryan Cranston was brilliant in this. I would have liked to have seen more of Jason Isaacs. He was only in it for about 3 scenes. For some reason this did remind me a bit of American Hustle, 2013. This is a film that requires a lot of concentration. There is nothing original or new in the story. We have seen this sort of story play out before in other films. Before the production began for this film Bryan Cranston spent several days with Robert Mazur observing his role model up close and personal. The main themes that occur in this are friendship and betrayal.