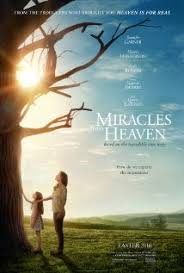 Review: Ten year old Anna has a rare digestive disorder. She has a terrible accident but finds herself miraculously cured that leaves medical specialists mystified.
Director: Patricia Riggen
Actors: Jennifer Garner, Kylie Rogers and Martin Henderson
Year: 2016
Genre: Biography, Drama and Family
Conclusion: 2/5
Based on a true story about a family in Burleson, Texas. You know pretty much what you are going to get just from the title. I found that Jennifer Garner didn’t actually add anything to this film. In fact I would say that she was the weak link. The strongest performances for me were the dad and the little girl. The thing I enjoyed and found the most interesting was at the end when they showed the footage of the real life family. This is now what people are calling a faith based movie. It does have an agenda and knows exactly how it wants to play out. Apparently when this film came out in America it did really well at the box office.