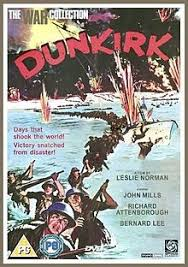 Review: A story based on the the British Expeditionary Force’s retreat to the beaches of France in 1940 and also the extraordinary seaborne evacuation that saved it from destruction by Nazi Germany.
Director: Leslie Norman
Actors: John Mills, Richard Attenborough, Bernard Lee and Robert Urquhart
Year: 1958
Genre: Drama, History and War
Conclusion: 4/5
I have struggled to find any sort of information out about this film on the internet. According to the BBFC when this film came out in 1958 there were some cuts that were required but the details are not available (U Rating). It then got another release in 1994 where there were no cuts made (PG Rating). Based on two novels: Eleston Trever’s The Big Pick-Up and Lt. Col. Ewan Hunter and Maj. J. S. Bradford’s Dunkirk. It is a very long film standing in at 2 hours and 14 minutes. After this film Leslie Norman later recalled “Dunkirk was bloody difficult to make from the logistics point of view. Yet it was made for £400.000, and came in under budget…it was the council school boy who became a major in the war, and that had a lot to do with the way I felt about Dunkirk. I didn’t think that Dunkirk was a defeat, I always thought it was a very gallant effort but not a victory.” This is the last film that film critic Barry Norman reviewed in the Radio Times before his death. Now that we have the Christopher Nolan film viewers can decide which of the two accounts of this amazing story they prefer, and which one gives a more accurate portrayal of what it was actually like to be there.