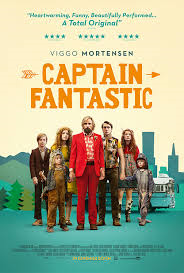 Review: In the Pacific Northwest of the forests, a devoted father raises his six kids. He gives them a rigorous physical and intellectual education but is forced in the end to leave his paradise and enter the real world. He then starts to challenge the idea of what it really means to be a parent.
Director: Matt Ross
Actors: Viggo Mortensen, George MacKay, Samantha Isler and Steve Zahn
Year: 2016
Genre: Comedy and Drama
Conclusion: 4/5
Captain Fantastic is a truly fantastic film! The soundtrack to this is brilliant. George MacKay is really starting to grow on me as an actor. He has been in films such as Sunshine on Leith (2013) and Pride (2014). It is a very funny film but also tragic as well. You could also say that it has a lot to do with sympathy and the fact of having to deal with loss in the family. Half way through this you start to question or ask yourself is the father a good or bad one in a sort of selfish way. There were times where I was worried it was going off in wrong direction but slowly made its way back into the film. The cinematography is amazing and captures the landscape wonderfully. Matt Ross has said that experiences with parenting has inspired him to make this film. Before filming this the director had the actors who portrayed the six kids sign a contract promising that they wouldn’t eat sugar or junk food for the duration of filming. At the Cannes Film Awards in 2016 Matt Ross won for the Un Certain Regard – Directing Prize.