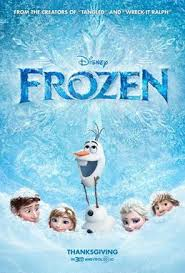 Review: Anna, a young princess goes on an icy quest to find her sister, Queen Elsa. Anna needs to do this because Queen Elsa has to break the spell that is keeping their Kingdom in a never-ending Winter. Along the way Anna meets a mountain man, his playful reindeer and a snowman to change the weather condition.
Directors: Chris Buck and Jennifer Lee
Actors: Kristen Bell, Idina Menzel, Jonathan Groff and Ciaran Hinds
Year: 2013
Genre: Adventure, Animation, Comedy and Family
Conclusion: 4/5
A very funny and charming film. The songs are great and so catching. After the film you will find yourself still singing along especially the song “Let It Go”. The visuals/scenery are amazing. They have done a fantastic job designing the characters, they are so expressive and detailed. Apparently with the reindeer they actually brought a real one into the studio so they could study its movements and mannerisms!! I even love the characters, there isn’t even one that you don’t like. A film that Disney have got right, it works in everyway. One that all the family can sit down and enjoy watching at Christmas. When Olaf is singing with the four seagulls, this is a reference to Bert’s dance with four penguins in Mary Poppins (1964). This is a film about sisterhood, family and relationships. It is stated that in February 2016 Disney Theatrical Productions announced that “Frozen” will join “The Lion King” and “Aladdin” on Broadway in Spring 2018. Just looking at the BBFC Insight page it does state some mild rude humour such as “What if he picks his nose? And eats it?”? I thought this was really funny. At the Academy Awards in 2014 this won 2 Oscars. They were for Best Animated Feature Film of the Year and Best Achievement in Music Written for Motion Pictures, Original Song. At the Golden Globe Awards in 2014 this won Best Animated Feature Film. At the Bafta Film Awards in 2014 this won the BAFTA Kids Vote – Feature Film and also Best Animated Film. There are very few girls under the age of 10 who are not obsessed with this film. This is one film that has become a classic almost as soon as it was released. http://www.imdb.com/video/imdb/vi2186193177?ref_=ttvi_vi_imdb_14