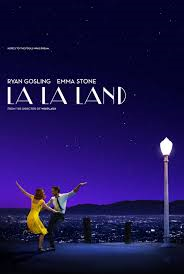 Review: A musical comedy about a relationship between a jazz musician and an aspiring actress in Los Angeles.
Director: Damien Chazelle
Actors: Ryan Gosling, Emma Stone, Rosemarie DeWitt and J.K. Simmons
Year: 2016
Genre: Comedy, Drama, Musical and Romance
Conclusion: 5/5
This is a film that I would quite happily have gone straight back in to see for the second time I loved it so much.  Not many people may agree with me but the first 5 minutes into this I was really worried and thought it would be too much like High School Musical or along those lines. However, it ticks all the right notes. The songs were all brilliantly written but the one that stands out for me is “City of Stars, are you shining just for me?”. It has been years since we have had a musical as good as this one, the last one being Sunshine on Leith (2013). Both Emma Stone and Ryan Gosling were fantastic. They have both appeared in two other films together. They were Crazy, Stupid, Love. (2011) and also Gangster Squad (2013).  I cannot believe that Damien Chazelle is only 31 years and yet he has now made 2 outstanding movies. This is the same director who worked on the brilliant Whiplash (2013). What could possibly be next for him? It must have taken hours/months of rehearsals to get the dance sequences right, especially up to this standard. Actress Emma Watson turned down this film to appear in Beauty and the Beast (2017). Also Ryan Gosling turned down the part for the Beast in Beauty and the Beast so he could appear in this! Ryan Gosling learnt all the piano sequences himself. When watching this you really need to bring tissues. Even just writing this review and thinking of the film is making me want to cry. It is a film that would break your heart. I came away from this film emotionally moved and not many films are able to do that for me. At the Golden Globes in January 2017 this won 7 Awards. They were for Best Motion Picture – Musical or Comedy, Best Performance by an Actor in a Motion Picture – Musical or Comedy (Ryan Gosling), Best Performance by an Actress in a Motion Picture – Musical or Comedy (Emma Stone), Best Director – Motion Picture (Damien Chazelle), Best Screenplay – Motion Picture (Damien Chazelle), Best Original Song – Motion Picture and Best Original Score – Motion Picture. This is the first film that has won every single Golden Globe category for which it was nominated, so it has already made history. At the Bafta Awards in 2017 this won 5 Awards. They were for Best Film, Best Director (Damien Chazelle), Best Leading Actress (Emma Stone), Best Original Music and for Best Cinematography. At the Academy Awards in 2017 this won 6 Awards. They were for Actress in a Leading Role (Emma Stone), Best Cinematography, Best Directing (Damien Chazelle), Best Music (Original Score), Best Music (Original Song) and Best Production Design.

One thought on “La La Land”