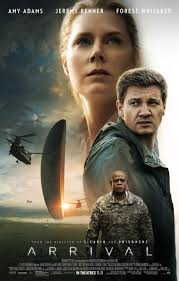 Review: Louise Banks, a linguist, is recruited by the military to assist in translating alien communications. Mankind starts to teeter on the brink of global war. It is now a case for Louise and the team to race and get answers. She takes a chance that could endanger her life and also humanity.
Director: Denis Villeneuve
Actors: Amy Adams, Jeremy Renner and Forest Whitaker
Year: 2016
Genre: Drama, Fantasy and Sci-Fi
Conclusion: 4/5
One terrific film. The lead actors are brilliant and this is quite clearly Amy Adams’ film. I do hope that she will get at least an Academy Award Nomination for her role as she deserves it. It was very well edited all the way through. The screenplay was also excellent (based from a short book made into a film). The short story was written by Ted Chiang and is called  “Story of Your Life”. The themes that are present are tragedy, sadness (grief), joy and you could say parental bonds. You could say on the other hand that it is an uplifting film despite all the sadness that is in it. I do think it is a film that needs to be seen in a cinema rather than just on T.V. This did remind me of a film called Solaris (2002) starring George Clooney. Both Jeremy Renner and Amy Adams starred together in American Hustle (2013).  The musical score by Johann Johannsson made the film come even more alive. Spoiler alert – there is a bird that is used to test if the alien’s atmosphere is safe. I found it to be very entertaining. At the Bafta Awards in 2017 this won 1 award and that was for Best Sound. At the Academy Awards in 2017 this won 1 award and that was for Best Sound Editing.