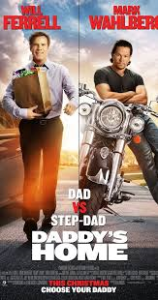 Review: Brad Whitaker has a job of a radio host. He is always trying to get his step-children to love hi and call him dad. One day their biological father, Dusty Mayron, returns. All chaos is let loose.
Director: Sean Anders
Actors: Will Ferrell, Mark Wahlberg and Linda Cardellini
Year: 2015
Genre: Comedy and Family
Conclusion: 2/5
We see Will Ferrell and Mark Wahlberg team up again (other being The Other Guys, 2010). Watching the trailer for this filled me with absolute dread. After watching the film I was pleasantly surprised and found myself rather enjoying it. It is not a great movie but if you want a movie where you don’t have to think and just want to fill in an hour and a half on a Friday night then this film is perfect. I actually found myself laughing a lot more than I expected. As well as Sean Anders directing this film he also did the screenplay for it. Other films he has done the screenplay for are She’s Out of My League (2010) and also We’re the Millers (2013). When it was time for them to film the airport scene at New Orleans it was actually too busy for them so in the end was filmed at New Orleans N. Morial Convention Center. For those who loved the film you will all be pleased that they have just announced that there is going to be a sequel out but no release date or any information about it yet.