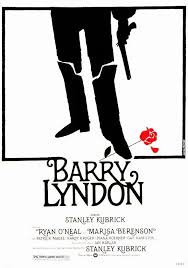 Review: Raymond Barry is a sensitive, ambitious and intelligent man but he finds himself in a society that has no use for him. He wins the heart of a rich widow and finds himself becoming the wealthy Barry Lyndon. He is a fictitious 18th Century Irish adventurer.
Director: Stanley Kubrick
Actors: Ryan O’Neal, Marisa Berenson and Patrick Magee
Year: 1975
Genre: Adventure, Classics, Drama and History
Conclusion: 5/5
Newly re-released in cinemas across the U.K. after nearly 40 years of its initial release. This masterpiece is a complete delight from beginning to end. This definitely needs to be seen on a big screen to get the full atmosphere. This is one of Kubrick’s most accomplished and influential films. Although when this film was first released it was received rather dismissively, it is now regarded as one of Kubrick’s finest works. The filming of this took 300 days during a two year span; they began in the May or June of 1973 and it wasn’t until December 1975 that it got released. During production it suffered two major shutdowns and resulted in a then bloated budget of $11 million. The story comes from William Makepeace Thackeray’s novel called The Luck of Barry Lyndon. When Kubrick made this film he was very much inspired by artists such as Thomas Gainsborough and William Hogarth. The film is worth seeing just for the period costume drama. The scenery is also breathtaking, filmed spectacularly by cinematographer John Alcott. This film was shot in three different locations.They were Ireland, England and Germany. Although they did film in Ireland the production company had to be moved to England because Stanley Kubrick received word that his name was on an IRA hit list for directing a film featuring English soldiers in Ireland. There couldn’t have been a better actor to play the main part other than Ryan O’Neal. It is not just Ryan O’Neal that gives an outstanding performance and the whole cast and all superbly chosen. Although Robert Redford was offered the part he turned it down. This is Martin Scorsese’s favorite Stanley Kubrick film. This is a film that I have thought a lot about since watching it. I was just amazed by it. At the Academy Awards in 1976 this won 4 Oscars. They were for Best Cinematography, Best Art Direction-Set Decoration, Best Costume Design and for Best Music, Scoring Original Song Score and/or Adaptation. At the Bafta Awards also the same year it won 2 Awards. They were for Best Cinematography and for Best Direction (Stanley Kubrick). Film Critic Barry Norman produced a list in the Radio Times at the start of 2013 of his 50 Greatest British Films and this was listed.

One thought on “Barry Lyndon”