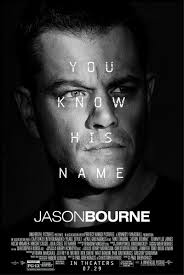 Review: A former CIA agent comes out of hiding after discovering information about his past.
Director: Paul Greengrass
Actors: Matt Damon, Tommy Lee Jones, Alicia Vikander, Vincent Cassel and Julia Stiles
Year: 2016
Genre: Action, Adventure, Drama and Thriller
Conclusion: 4/5
A film that has divided film critics. I have to say that I rather enjoyed it. Director Paul Greengrass once again directing a Jason Bourne film and reuniting with actor Matt Damon. You can quite clearly see that Paul Greengrass and Matt Damon have a good relationship. Before making this film Matt Damon actually stated that he wouldn’t do another Bourne movie unless Paul Greengrass was involved. They have also worked together on a film called Green Zone (2010). Most of this film consisted of action sequences and throughout this movie Jason Bourne only says 288 words. This is the fifth installment of the Bourne franchise. It is nearly a decade ago when we had The Bourne Ultimatum (2007). In between we have had the forgettable The Bourne Legacy  (2012) with Jeremy Renner. There were some fantastic scenes in this especially the scene with the car chases. I like it how the film starts and there are no opening credits. You are straight in. I enjoyed the score in this and sometimes felt it made the film very tense and exciting.There is going to be another Bourne film but not until 2018 or 2020 and this will star Jeremy Renner.