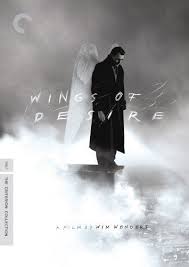 Review: An angel tires of overseeing human activity. He wishes to become human when he falls in love with a mortal.
Director: Wim Wenders
Actors: Bruno Ganz, Solveig Dommartin and Otto Sander
Year: 1987
Genre: Drama, Fantasy and Romance
Conclusion: 4/5
This is actually a Foreign Language Film that comes from Germany. The original title for this is Der Himmel uber Berlin. This has a fantastic soundtrack from musician Nick Cave. At the Cannes Film Festival in 1987 Wim Wenders won an award for Best Director. A very similar film to this was made called City of Angels (1998) staring Meg Ryan and Nicolas Cage. Wings of Desire is a very beautiful and deeply romantic piece of cinema.