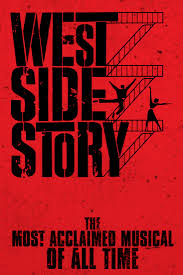 Review: A romantic musical update of ‘Romeo and Juliet’. It is 1950’s New York City and two youngsters from rival gangs fall in love. Tensions between their respective friends build towards tragedy.
Director: Jerome Robbins and Robert Wise
Actors: Natalie Wood, George Chakiris, Richard Beymer and Rita Moreno
Year: 1961
Genre: Crime, Drama, Musical and Romance
Conclusion: 5/5
The best musical ever to be made. This will always be remembered as a cult film. Just the dancing alone is worth watching the film for. The way that all the actors do everything and in time with each other must have taken hours of preparation. Audrey Hepburn was offered the part of Maria but she turned it down. This is the only film that Jerome Robbins ever directed. At the Academy Awards in 1962 this won 10 Oscars. They were for Best Picture (Robert Wise), Best Actor in a Supporting Role (George Chakiris), Best Actress in a Supporting Role (Rita Moreno), Best Director (Jerome Robbins and Robert Wise), Best Cinematography – Color, Best Art Direction – Set Decoration – Color, Best Costume Design – Color, Best Sound, Best Film Editing and Best Music – Scoring of a Musical Picture. At the Golden Globe Awards the same year it won 3 Awards. They were for Best Motion Picture – Musical, Best Supporting Actress (Rita Moreno) and Best Supporting Actor (George Chakins). This is on Barry Norman’s list of 100 Greatest Films of all time that he produced at the start of 2012 in the Radio Times. One film critic wrote about this film “Leonard Bernstein’s rich, eloquent and demanding score is still a powerful experience”. Over 50 years old but hasn’t dated at all.
http://www.imdb.com/video/screenplay/vi4134641177?ref_=ttvi_vi_imdb_3