THE MAGIC OF BELLE ISLE 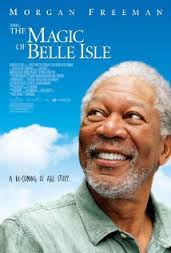 Review: Monty Wildhorn is an alcoholic novelist. He has lost his passion for writing. During the summer he goes and stays in a cabin on Belle Isle. He makes friends with a single mum and her 3 girls. They give him the inspiration to write again.
Director: Rob Reiner
Actors: Morgan Freeman, Virginia Madsen and Madeline Carroll
Year: 2012
Genre: Comedy and Drama
Conclusion: 2/5
A very predictable film. You knew all the way through as to what would happen. Given the plot summary I could have written the whole script. I asked my brother as to what he thought the film was about and without even me talking to him about anything he gave me a word to word count for each scene. Not one of Morgan Freeman’s best films by far. This film is also known as Once More. A very forgettable movie. Extremely cheesy throughout. One film critic wrote “If this were real life and not a movie, Mr. Wildhorn would be written off as a crank and ostracized within a week”.