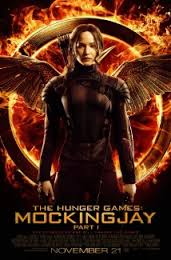 Review: This film finds Katniss Everdeen in District 13 after she shatters the games forever. She is still trying to save Peeta from the Capitol.
Director: Francis Lawrence
Actors: Jennifer Lawrence, Josh Hutcherson, Liam Hemsworth, Philip Seymour Hoffman and Sam Claflin
Year: 2014
Genre: Action, Adventure, Drama and Sci-Fi
Conclusion: 3/5
This is the third of The Hunger Games installment. I would say that this is the weakest of the three films so far. It is sad that this is one of Philip Seymour Hoffman’s last performances as he is such a great actor and brings a powerful presence to the screen. Will be gratefully missed by millions of people. I didn’t find it as tense as the other two films. The character, Gale holds the whole film together and keeps everyone in place. There were some scenes that I felt were too long and others that didn’t really need to be in. Julianne Moore’s children convinced her to take up the role as they have read the books. Mockingjay-Part 2 has already been filmed and will be out next November.