WHAT WE DID ON OUR HOLIDAY 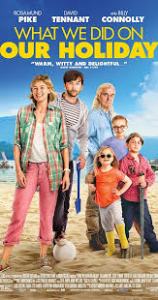 Review: Doug and Abi take their three children on a trip to Scotland to celebrate their Granddad’s big 75th birthday. The parents are going through a difficult divorce but have asked the kids to keep it a secret from the rest of their family.
Directors: Andy Hamilton and Guy Jenkin
Actors: David Tennant, Rosamund Pike, Billy Connolly, Ben Miller, Amelia Bullmore, Emilia Jones, Bobby Smalldridge, Harriet Turnbull, Celia Imrie, Annette Crosbie, Ralph Riach, Ron Donachie, Ben Presley and Michele Austin
Year: 2014
Genre: Comedy and Drama
Conclusion: 3/5
A very funny film. I have to say that I did laugh quite a few times unexpectedly. I did find that the start of the film was very realistic and could totally relate to it. I felt like I believed in all the characters and what they were all going through. Both David Tennant and Rosamund Pike were terrific. There were times where it lost its plot slightly but then came back on itself. I also felt that towards the end it didn’t quite know how to finish.