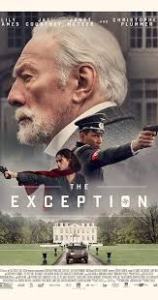 Review: A German soldier Stefan Brandt goes on a mission to investigate exiled German Monarch Kaiser Wilhelm II in The Netherlands. He soon finds himself drawn unexpectedly into a passionate romance with one of the Kaiser’s maids Mieke. He secretly discovers she is Jewish but he also has to make a decision between honoring his country or to follow his heart.
Director: David Leveaux
Actors: Lily James, Jai Courtney, Christopher Plummer, Anton Lesser, Janet McTeer, Ben Daniels and Mark Dexter
Year: 2016
Genre: Drama, Romance and War
Conclusion: 2/5
This film is adapted from a 2003 novel The Kaiser’s Last Kiss by Alan Judd. When watching this it almost felt as though I had already watched it before. I wasn’t engaged at all with anything and felt it was all a bit flat. There was no pace and nothing to keep the story-line moving on.