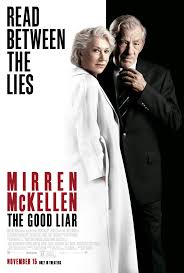 Review: Veteran conman artist Roy can hardly believe his luck when he meets recently widowed Betty, who is worth millions, online. She opens her home to him but Roy is finding himself caring about her. What should have been another cut-and-dry swindle takes on the ultimate stakes.
Director: Bill Condon
Actors: Helen Mirren, Ian McKellen, Russell Tovey, Johannes Haukur Johannesson, Jim Carter, Mark Lewis Jones, Lily Dodsworth-Evans, Phil Dunster, Michael Culkin, Laurie Davidson, Celine Buckens, Patrick Godfrey, Nell Williams, Bessie Carter and Dino Kelly
Year: 2019
Genre: Drama and Thriller
Conclusion: 4/5
Adapted from a novel by Nicholas Searle. Stand out performances from Helen Mirren and Ian McKellen. Always great to see Russell Tovey. I did think that this was very well edited and cut. Half way through the film there is a change of direction which was very interesting. On the Kermode and Mayo radio program Helen Mirren was interviewed. She suggested that this film is slightly on the Hitchcockian side of things and I do have to agree with her. Bill Condon and Ian McKellen have collaborated before on Mr. Holmes (2015) and also Beauty and the Beast (2017). I found this to be a really engaging and enjoyable film with a very strong cast and very good direction.