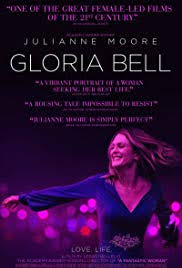 Review: Gloria is a free-spirited divorcee in her 50’s who seeks out love at L.A. dance clubs.
Director: Sebastian Lelio
Actors: Julianne Moore, John Turturro, Caren Pistorius, Michael Cera, Brad Garrett, Holland Taylor, Jeanne Tripplehorn, Rita Wilson, Chris Mulkey, Cassi Thomson, Tyson Ritter, Jesse Erwin, Chopper Bernet, Gerard Sanders and Sam Behrens
Year: 2018
Genre: Comedy, Drama and Romance
Conclusion: 2/5
This is an English version remake of the Chilean film, Gloria (2013), from the same director. Why it has to be re-made I really don’t know. I have to say that I haven’t enjoyed any of Sebastain Lelio’s work. Other directorial films of his include The Fantastic Woman and Disobedience (both 2017). Julianne Moore and John Turturro are both good actors and act very believably in this film. You actually believe in their characters. I did feel that the film never really started and was waiting for the big event to happen. It was also very bland. I wondered after what the whole point of the film was.