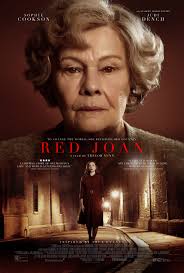 Review: A true story of Joan Stanley who is suddenly arrested by MI5 for being one of the most influential British spies in living history.
Director: Trevor Nunn
Actors: Judi Dench, Sophie Cookson, Stephen Campbell Moore, Nina Sosanya, Laurence Spellman, Nicola Sloane, Tereza Srbova, Freddie Gaminara, Tom Hughes, Adrian Wheeler, Ben Miles, Lulu Meissner and Phill Langhorne
Year: 2018
Genre: Biography, Drama and Romance
Conclusion: 2/5
Red Joan is adapted from Jennie Rooney’s 2013 novel, but the story is inspired by the case of Melita Norwood. Judi Dench is not used enough in this in my opinion and I would have liked to have seen more of her. Her total screen time is only about 5 minutes. How much of this film is actually true I don’t know. There were times where I felt nothing was really happening and they could have moved the story-line on much quicker especially for a 1 hour 40 minute film. I do feel this would be much better as a Sunday night mini- TV drama rather than a full feature length film. There were moments in this that were very dull, boring and slow moving.