YOU WERE NEVER REALLY HERE 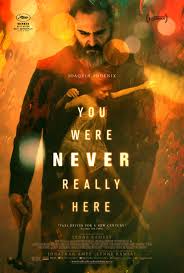 Review: A traumatised veteran, unafraid of violence, is hired to find a missing girl.
Director: Lynne Ramsay
Actors: Joaquin Phoenix, Judith Roberts, Eketerina Samsonov, Dante Pereira-Olson, Vinicius Damasceno, Frank Pando, John Doman, Alex Manette and Claire Hsu
Year: 2017
Genre: Crime, Drama, Mystery and Thriller
Conclusion: 4/5
This is from the same director who made We Need to Talk About Kevin (2011). Based on a novel by Jonathan Ames. On the one hand you could look at this film and see it is about a bad man who wants to escape the life that he has ended up in but doesn’t know how to get out of the situation he is in. It is also about corruption and revenge. I did find this quite a hard watch, for instance it was much more violent than I thought it was going to be and disturbing. I very much enjoyed the soundtrack to this film. I did find that this film has similarities to The Shawshank Redemption (1994) and also Psycho (1960). At the Cannes Film Festival in 2017 Lynne Ramsay won the award for Best Screenplay and Joaquin Phoenix won for Best Actor. This was completed only a few days before the first public screening and was submitted to the Cannes Film Festival in an unfinished state. It received a seven-minute standing ovation at its Cannes Film Festival premiere, on May 27, 2017.