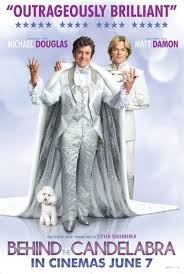 Review: Focuses on the six year relationship between megastar singer, Liberace, and his young lover, Scott Thorson.
Director: Steven Soderbergh
Actors: Michael Douglas, Matt Damon, Scott Bakula, Eric Zuckerman, Eddie Jemison, Randy Lowell, Jane Morris, Garrett M. Brown, Pat Asanti, Debbie Reynolds, Casey Kramer and Cheyenne Jackson
Year: 2013
Genre: Biography, Drama and Romance
Conclusion: 3/5
Even though this is a full feature length film over in America it was a mini TV series. I enjoyed this film a lot. It is a story which I knew nothing about beforehand. This is a very funny and easy film to watch. Good performances from both Michael Douglas and Matt Damon. Even though Michael Douglas plays Liberace, in real life Michael Douglas is a lot older than Liberace actually was even at the time of filming this and also when Liberace died. Also Matt Damon was 42 years, Scott Thorson was only a teenager when he met Liberace; he was 23 when their relationship ended in April 1982. Liberace was actually 40 years older than Scott Thorson. Matt Damon wore a wig in order to appear younger. It is said that Robin Williams was set to play Liberace. This is Debbie Reynolds’ final live-action acting role. At the Golden Globe Awards in 2014 this won two awards. They were for Best Miniseries or Motion Picture Made for Television and also Best Performance by an Actor in a Miniseries or Motion Picture Made for Television (Michael Douglas).