THE ONLY LIVING BOY IN NEW YORK 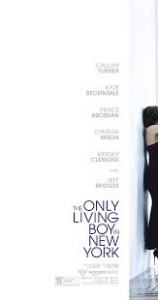 Review: A young college graduate forges a close friendship with his eccentric neighbour. Also his world begins to change once he discovers that his father is having an affair with a younger woman.
Director: Marc Webb
Actors: Callum Turner, Kate Beckinsale, Pierce Brosnan, Jeff Bridges, Cynthia Nixon, Kiersey Clemons, Tate Donovan, Wallace Shawn, Anh Duong, Debi Mazar, Ben Hollandsworth, John Bolger, Bill Camp, Richard Bekins and Ryan Speakman
Year: 2017
Genre: Drama
Conclusion: 2/5
I couldn’t engage with this film. I had no time for any of the characters. This is from the same director who directed Gifted (2017) which I thoroughly enjoyed and also The Amazing Spider-Man 2 (2014) so this does show that he can be a good director. I found the whole pace of the film incredibly slow. The title of this film is taken from a Simon and Garfunkel song.