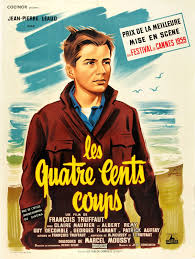 Review: A 13 year old boy is left without attention. He delves into a life of petty crime. These adventures were based on the director’s own adolescence.
Director: Francois Truffaut
Actors: Jean-Pierre Leaud, Albert Remy and Georges Flamant
Year: 1959
Genre: Art House, Classics, Crime, Drama and International
Conclusion: 5/5
Former critic turned director directs his feature debut in The 400 Blows which is now regarded as a classic. The original title for this is Les quatre cents coups. It is hard to believe that this was made for a mere $75.000. I found this to be very moving at times and I was also very engaged throughout the film. Apparently all the young actors who unsuccessfully auditioned for the role of Antoine were used in the classroom scenes. Looking through a book called Directing Film Techniques and Aesthetics there is a whole chapter about directors and their lives and making a film about themselves. Some of the questions they raise about this film are: Is it helpful or is it destructive to “understand” your own experience too well? Should one seek professional help in doing so? For each person there would be a different answer for but this just makes you think. The BBFC website states that this film was originally passed ‘A’ in 1960 following cuts, and ‘PG’ uncut in 2001. In terms of current classification standards, the film remains ‘PG’ for cinema re-release because of mild bad language, violence, sex references and smoking scenes. At the Cannes Film Festival, Francois Truffaut won the Best Director Award.