NIGHT OF THE LIVING DEAD 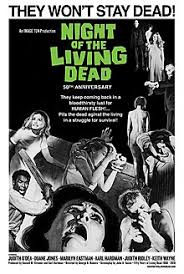 Review: The nation are in panic as the dead suddenly come back to life. A group of characters barricade themselves in an old farmhouse in order to remain safe.
Director: George A. Romero
Actors: Duane Jones, Judith O’Dea, Karl Hardman, Marilyn Eastman, Judith Ridley, Kyra Schon, S. William Hinzman, George Kosana and A.C. McDonald
Year: 1968
Genre: Classics and Horror
Conclusion: 5/5
A film in which director George A. Romero redefined the meaning of horror. Usually in films such as these it is normally the case that good will conquer evil but not this time. Apparently all the ghouls were only paid a measly $1 for their work. They were given a T-Shirt which read “I was a zombie on Night of the Living Dead”. Unfortunately watching this in the current day no longer scares the daylights out of viewers because of its countless imitations. One of the most successful independent films ever made. This was made for $1140,00 (equivalent to $798,000 in 2017), it grossed approximately $30 million (equivalent to $20 million in 2017) – over 263 times its budget. One of the quotes in this is “They’re coming to get you, Barbara, there’s one of them now.” Prior to this there has been five sequels Dawn of the Dead (1978), Day of the Dead (1985), Land of the Dead (2005), Diary of the Dead (2007) and Survival of the Dead (2009). According to to BBFC one or more versions have been cut but no information found as to what has been cut exactly. At the start of 2012 film critic Barry Norman produced a list of the 100 best films and this was amongst the list.
http://www.imdb.com/title/tt0063350/videoplayer/vi2325283097?ref_=tt_pv_vi_aiv_2