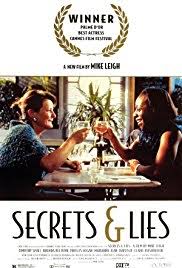 Review: Hortense, a successful, black London optometrist pays a visit to a social worker in the hope of finding her biological mum. While reading through all the information Hortense has been given she discovers that her birth mum is just an underprivileged white woman. Hortense gets in touch with her biological mum who denies everything. Suddenly emotions run high and everyone’s secrets are exposed.
Director: Mike Leigh
Actors: Timothy Spall, Brenda Blethyn, Phyllis Logan, Claire Rushbrook, Marianne Jean-Baptiste, Elizabeth Berrington, Michele Austin, Lee Ross, Lesley Manville, Ron Cook and Emma Amos
Year: 1996
Genre: Comedy and Drama
Conclusion: 4/5
This is Mike Leigh’s directorial masterpiece. Each of the cast give their own unique performance especially Timothy Spall and Brenda Blethyn. The script was very well written and thought out plus most of the script was improvised there and then. I didn’t feel like I was watching a film, it felt more of a documentary being played out in front of my eyes. Everyone seemed so real, I felt I actually knew them all and what they were going through. Apparently Brenda Blethyn and Marianne Jean-Baptiste never met before the scene in which they met in the film. At the beginning of 2013 the late Barry Norman produced a list in the Radio Times of the 50 Best British Films of all time and this was featured amongst the list. At the Golden Globe Awards in 1997 Brenda Blethyn won for Best Performance by an Actress in a Motion Picture – Drama. At the Bafta Awards in 1997 this won for Best Screenplay – Original (Mike Leigh) and also for Best Performance by an Actress in a Leading Role (Brenda Blethyn). Simon Channing Williams and Mike Leigh won the Alexander Korda Award for Best British Film. At the Cannes Film Festival in 1996 it won three awards. They were for Best Actress (Brenda Blethyn), Palme d’or (Mike Leigh) and the Prize of the Ecumenical Jury (Mike Leigh).