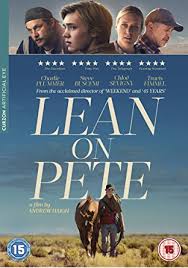 Review: Fifteen year old Charley Thompson and his father arrive in Portland, Oregon eager for both of them to make a fresh start in life. Charley lands himself a summer job working for a horse trainer and befriends a fading horse named Lean on Pete. Charley takes Pete out on a treacherous journey to Wyoming. He goes in search for a loving aunt he hasn’t seen in years.
Director: Andrew Haigh
Actors: Charlie Plummer, Amy Seimetz, Travis Fimmel, Steve Buscemi, Ayanna Berkshire, Kurt Conroyd, Chloe Sevigny, Julia Prud’homme, Jason Rouse and Lewis Pullman
Year: 2017
Genre: Adventure and Drama
Conclusion: 4/5
This film is based on a novel by the same name by Willy Vlautin. Although I have to say I have not read the novel myself. Another brilliant film by Andrew Haigh who has just directed the wonderful 45 Years (2015). An outstanding performance from actor Charlie Plummer. I hope to see much more of him in the future. This whole film was shot in chronological order. I found it really interesting to see the American landscape and really got a feel for what it was like which you don’t always get in films. One little interesting fact is that there is an actual race horse called Lean on Pete, registered in Ireland. I won’t give anything away but there were times where I found it to be emotionally moving.